Many thanks to Folk Wales for making Dithis their ‘5 Star Choice’ for June.

You can read the full review below:

In this challenging lockdown year of 2020, amazing things keep happening; a welter of Five-Star Choice albums keep dropping through my letterbox. We all have a conviction that the folk scene carries on delivering inspiring, go-ahead and super-punchy material – and this one is a very special and unique debut album. After a decade working on very different musical paths, sibling duo Joy and Andrew Dunlop have come together at the Isle of Mull’s creative and cultural beacon and art sanctuary, An Tobar, to lay down 11 shimmeringly beautiful tracks – and it’s all recorded by An Tobar’s music director and acting CEO Gordon Maclean, erstwhile double-bass player with the late lamented Edinburgh band Jock Tamson’s Bairns.

Joy and Andrew come from the village of Connel on the Scottish West Highlands of Argyll and Bute, situated on the southern shore of Loch Etive. Joy was crowned Traditional Singer of the Year and Traditional Dance Champion at the 2015 Mὸd Pan Celtic Festival; she’s the weather presenter on BBC Scotland and BBC Alba, in addition to frequent appearances on Radio Scotland and Radio nan Gaidheal. She also conducts the Alba Choir, Scotland’s first ever Eurovision entry. Andrew is a versatile international musician, currently working as a pianist for Northern Ballet; he has won numerous awards and championships and is artistic director of the Lorn Live Chamber Music Festival in Oban. In addition, he teaches for Yorkshire Young Musicians and is an examiner for ABRSM, the examinations board and registered charity of the Royal Schools of Music, delivering countless thousands of music exams and assessments all over the world.

Dithis / Duo combines a magical blend of traditional Scottish culture, both ancient and modern, and dazzling keyboard mastery; the sheer simplicity of Joy’s plaintive soprano voice and Andrew’s brilliant piano arrangements make listening a real pleasure. ‘A Mhairead Og’ (Young Margaret) is a Gaelic version of the ‘Polly Vaughan’-type tragic ballad that is sung throughout the British Isles and America too; in this account, the girl goes to the pool to bathe, just as the mother sends her son out to hunt for duck. As he passes the pool, he sees a flash of white and fires – but he discovers to his horror that he has killed his one true love. The age-old moral of the story is: he should have gone to Specsavers.

Joy and Andrew remember hearing the gay, strutting ‘A Fhleasaich an Fruilt Chraobhaich Chais’ (Boy With The Golden Hair) by Mary Pollock, an Islay native who taught Connel children their Mὸd songs on a Monday afternoon after school. The duo have made a mighty song of that, and Mrs Pollock would have been proud and overjoyed. In contrast, ‘Solas M’aigh’ is one of the most entrancing and majestic Gaelic songs composed in recent history; it was written by Blair Douglas for Father Colin Macinnes, who left his home in South Uist to work in Equador. The starkness is breathtaking; Joy’s angelic vocals are overdubbed to create a heavenly choir, and Andrew’s piano is delicate and sparing – such lovely, lovely stuff.

They audaciously and expertly ring the changes, from the tripping and tongue-twisting ‘Puirt a Beul’ (Mouth Music) through ‘I Wonder What’s Keeping My True Love Tonight’ to Frank Higgins’ heart-rending ‘The Testimony Of Patience Kershaw’, an actual statement which the 17-year-old Yorkshire girl gave to the Children’s Employment Commission in 1842. Patience had been employed in the Halifax mines for six years, the only girl working with naked men and boys – and the brutal experience bruised her body and her modesty.

Joy and Andrew make a grand job of Scottish writer David Francey’s wonderful song ‘Saints And Sinners’, and they revisit Edinburgh-based harp and fiddle duo Twelfth Day’s delicate composition ‘The Light Gatherer’ – Joy, Catriona and Esther collaborated on the album Fiere, an exploration on the lives, loves and experiences of Scottish women, and this song was recorded. There’s a brace of the great Gaelic love songs: the impressive ‘A Mhic Iain ‘lc Sheumais’ (Son of John, Son of James) and the tragic ‘Cadal Cha Dèan Mi’ (Sleep Evades Me), Joy’s description of a woman who has lost her love when he was drowned at sea. The last track is a perfect finisher: ‘Ae Fond Kiss’, the love-struck hopelessness which Robert Burns composed to Agnes McLehose. Their passionate relationship drifted apart, and Burns left Edinburgh and married. However, on the request of her estranged husband, Agnes sailed to The West Indies – and this song is the result. Joy and Andrew make a perfect combination; her passionate rendition melts into his empathetic accompaniment, creating a solid-gold musical pleasure. I, for one, will be heading north to hear them. 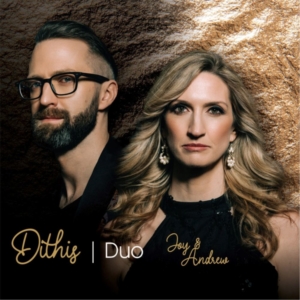